From playing a homophobic father in Shubh Mangal Zyada Saavdhan to a corrupt politician in Lootcase, Gajraj Rao had enough on his platter in 2020. Rao feels more settled and less frustrated after nearly 10 months of the pandemic and believes 2020 was indeed a good teacher.

“Despite living a bunker life, our family did not let hopelessness come in our lives,” Rao said. In a candid chat with indianexpress.com, the actor looked back at the year gone by, the project that made him the happiest and how an artiste’s real personality gets reflected in his craft.

Here are excerpts from the conversation:

The year started on an exciting note with Shubh Mangal Zyada Saavdhan. Though there was apprehension as to how people will perceive this subject, it was welcomed. So, I was looking forward to celebrating its success with my team and the audience. But the pandemic put a full stop on everything. When Lootcase released in July, it brought back the motivation. Soon, the web became dominant, I did some 50-60 lives which was a new experience, work from home was new, I directed some projects too. Now, after 10 months, I feel settled and not as frustrated. 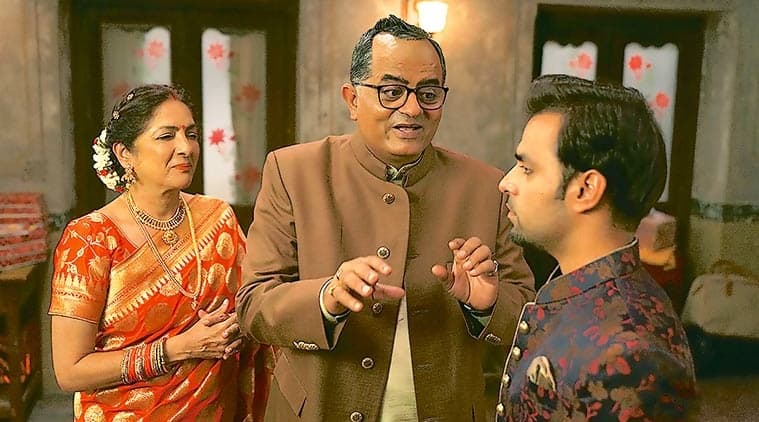 Gajraj Rao with Neena Gupta and Jitendra Kumar in a still from Shubh Mangal Zyada Saavdhan.

Was lockdown a different phase?

We thought it’s a temporary thing but the first month was unbearable. It was like living in bunkers during the World War, looking at the same faces every day. Soon, we realised it’s going to stay for a long time. Family support came to the rescue. The aim was to keep harmony at home and not have bleakness there. The biggest achievement of my family was we didn’t get bored of each other and disappointment did not become a part of our lives.

You were part of so many projects in 2020 – Shubh Mangal Zyada Saavdhan, Lootcase, Masaba Masaba, Pariwar… I’m sure you didn’t miss the spotlight.

All these projects were shot before 2020. Their release helped my mind stay active. The result of Lootcase supported me the most, at least mentally. It created immense positivity for me and my well-wishers. We really enjoyed recreating that Badhaai Ho scene in Masaba Masaba too. It’s always special with Neena ji. We are looking forward to more projects together. 2020 was like a rope walk. But these projects ensured balance.

Which project was the most fulfilling last year?

Shubh Mangal Zyada Saavdhan because my character of Shankar Tripathi was difficult. Since we were talking about homophobia, we did not want it to look preachy. We were very conscious about people judging the film, rather we wanted them to take it as entertainment and try to understand such kind of a relationship. Our characters of Shankar and Sunaina were edgy. So that was an accomplishment. Gajraj Rao starrer Lootcase was lauded for its dark comedy.

Any show or film this year you wished you were a part of, and why?

I liked Taj Mahal 89, its quirkiness and the way it created that period. I would’ve loved to be a part of that. Then Paatal Lok was like a missed opportunity. I loved Aarya too. I’m so jealous of these shows (laughs).

This year, the digital space brought democracy. Now, preference is not on any blue blood or someone who’s directed five films. The web gave us incredible content, which we hadn’t even heard of. Look at Paatal Lok or Scam 1992, nobody thought they’ll become such huge shows. The audience is appreciating that kind of storytelling now.

Your style of acting has become a reference point. How do you take it?

I did not receive such appreciation before Badhaai Ho. But this film became a turning point. No actor creates his style. That’s a part of his personality. Take Utpal Dutt for example. I don’t think his style of speaking or acting was made up. It just reflected his real life understanding of things. So, I feel even for me, the literature I’ve read or the cinema I’ve seen, shows in my work. Jeetendra Kaushik (Badhaai Ho) happened to me in 2017-18. It’s not that I’ll continue to do good work by default. I still need to do my homework for every character.

There’s an anthology film with Manoj Bajpayee for Netflix, directed by Abhishek Chaubey. Then, there is an Imtiaz Ali produced-film. The shooting will happen in mid-2021, if all goes well. Even if things don’t get better and we still have to do a rope walk. Now, I’m sure we’ve got the experience to handle the situation well. Our hearts won’t sink anymore.

Previous articleHistory and Significance of the Day
Next articleObjection to smoking visuals in K.G.F Chapter 2 teaser