#HowIMadeIt! Maanvi Gagroo: It’s okay if someone has a problem with my weight | Hindi Movie News

With two films and several web shows, Delhi girl Maanvi Gagroo has made a place for herself in Mumbai. In fact, she’s now recognised on the streets even when she’s wearing a mask, thanks to her voice. But success came gradually to the actress, who found herself flailing and floundering for a while in the City of Dreams. For #HowIMadeIt this week, the actress recounts her journey so far… 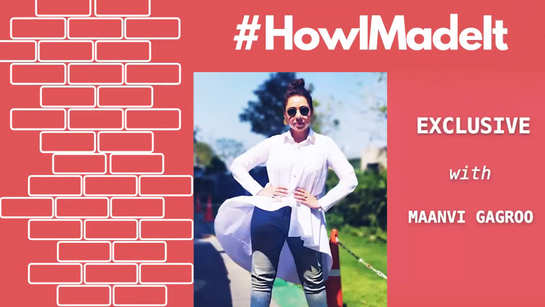 Maanvi got a taste of showbiz in 2007 with the TV show ‘Dhoom Machao Dhoom’. She followed it up with a couple of telefilms and short films, with one even fetching her good reviews. “After being praised for ‘Aamras’, I thought it will be very easy for me,” she recalls, adding that she felt that if only she settled down in Mumbai, her career would take off and everything would fall into place. However, her father had cautioned her about the “very tricky industry” that offers “no job security”. In her optimism, she threw caution to the wind and moved bag and baggage from Delhi. “But it wasn’t easy at all; I had to learn how the industry works–casting directors, introductions and auditions,” she admits.

The auditions were no cakewalk and Maanvi had her share of rejections. “I was never given a reason if and when I was not chosen. But then, at times, I used to hear that I am neither fat nor thin and the makers cannot decide where would I fit. But am I not just like most Indian women who are neither too skinny nor too big?” wonders Maanvi, who’s tired of hearing that she has enormous talent and just needs to lose a bit of weight. So much so, that she has put herself on a diet which helps her maintain weight. “If someone has a problem with my weight, it’s okay, let them,” she shrugs.

Maanvi has emerged stronger since her struggle to make a name for herself and hence didn’t bat an eyelid before taking action when asked to “compromise” to get a role. She immediately informed the OTT platform, whose offer the offender was using as bait, asking them to take action against him.

But things began to look up for Maanvi after the webseries ‘Tripling’. She also got her chance at the big screen with two films, ‘Ujda Chaman’ and ‘Shubh Mangal Zyada Saavdhan‘ but isn’t happy with their box office performance. Incidentally, it was her ‘SMZS’ co-star Ayushmann Khurrana‘s ‘Bala‘ that dented her first film with Sunny Singh. “I think ‘Ujda Chaman’ was perhaps not marketed well. Many people were unaware as to what it was about and when it was releasing. As for ‘Shubh Mangal Zyada Saavdhan’, the subject of same-sex love was ahead of its times and that’s why the film’s collections didn’t skyrocket,” reasons Maanvi.

However, web shows like ‘Permanent Roommates’, ‘Made In Heaven’, and ‘Four More Shots, Please’ have helped the actress find a footing in the industry and she’s hopeful for the future. “I want to work with people who will not have creative differences with me, people I am comfortable with. I don’t want to do a film which has a wrong social message,” she signs off.