Recounting an incident that took place back in 2005, the actress wrote, “When I had met him in April 2005, a few days after my father’s demise, he had taken his penis out of his pants and had asked me to feel it. I remember having told him that I know how a penis feels like and that the purpose of my meeting with him was not to feel or rate his penis”.

Sherlyn went on to add that their phone record is proof of the incident. “It’s not an accusation but the disclosure of a fact. Our phone records of the past may be checked regarding the same. After flashing his penis, he had not only asked me to touch it and feel it but also asked me if I had ever seen a penis as well endowed as his,” she tweeted, adding, “I was emotionally broken at the time as in early April 2005, I had lost my father, late Dr Prem Sagar Chopra. A few days after my father’s demise, I was called for a meeting by the filmmaker. Little did I know that the meeting would be centred around his penis!” 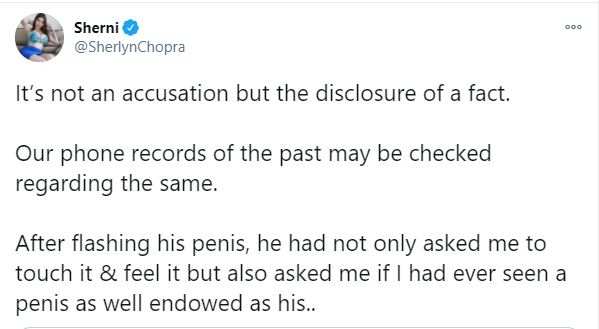 In the past, several other actresses too have accused Sajid of misconduct, following which he was suspended from the Indian Film & Television Directors’ Association for a year.