Its been almost seven months since Bollywood actor Sushant Singh Rajput passed away leaving his fans, followers and friends in a state of grief but nothing seems to change for his family, who still mourns the late actor’s death. His sister Shweta Singh Kirti and niece Mallika Singh often share old photos and videos of the late actor and his pet dog Fudge on social media. Yet again, his niece Mallika shared a video of Sushant Singh’s furry friend walking around, which made SSR’s fans emotional.

The Kedarnath actor was very close to his pet dog Fudge. After his death, Fudge has reportedly been staying with the late actor’s father K.K. Singh. Mallika shared the video on her Instagram story and treated his fans with an aww-dorable and cute glimpse. In the clip, Fudge can be seen enjoying his time in the garden. The dog looks healthy and happy in the video.

Fudge looked adorable in a red outfit. Take a look at the video here:

Earlier, taking to her Instagram story, Mallika shared a video dating back to June 2016 where Sushant was seen playing with his little pet dog. In the video, we get to see ‘Kai Po Che’ actor sitting on a chair and slowly crawling towards his pet dog. Sharing the video dating back to June 28, 2016, Mallika wrote, “This is one of my favourite videos.”

On Sushant Singh Rajput’s five-month death anniversary, Mallika had also posted a photo of the actor with herself. In the photo, Sushant was seen holding her tightly while smiling at the camera. “God has you in his keeping, I have you in my heart. 5 Months,” she wrote along with the photo posted on Insta Stories. 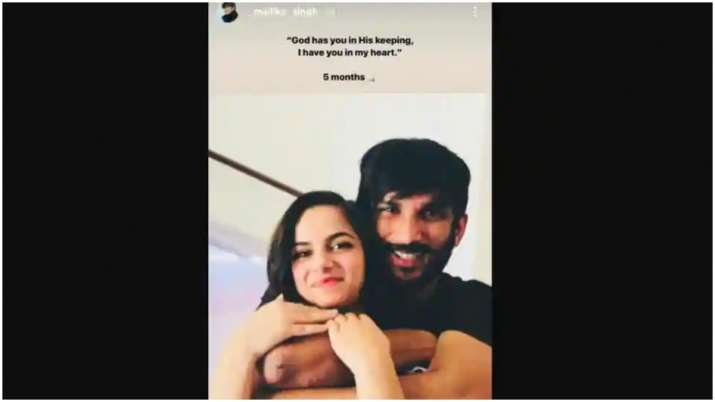 Sushant was found dead at his Mumbai residence on June 14. The Dil Bechara actor died by suicide. However, CBI, the Enforcement Directorate (ED) and the Narcotics Control Bureau (NCB) have been probing the case.