Barack Obama Wishes Joe Biden On Inauguration Day: This Is Your Time 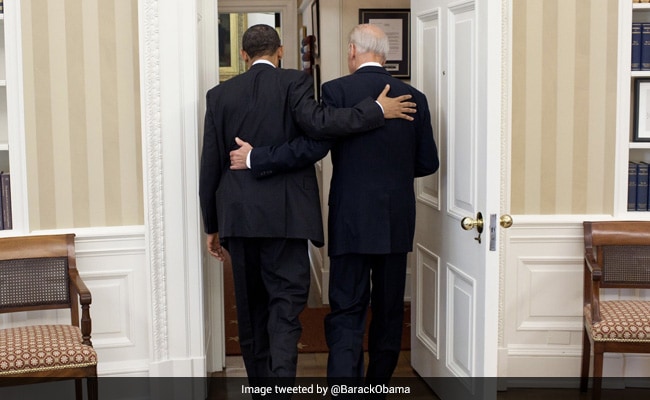 Barack Obama posted a photo with Joe Biden on Twitter.

Former US President Barack Obama congratulated President-elect Joe Biden ahead of his inauguration Wednesday, sharing a meaningful photo on Twitter.

“Congratulations to my friend, President @JoeBiden! This is your time,” Obama wrote.

Congratulations to my friend, President @JoeBiden! This is your time. pic.twitter.com/LXzxGnBAfz

With a promise to “heal” America, which in recent months witnessed a chaotic election and messy transition of power, Joseph R Biden will take the oath to become the 46th President of the United States on Wednesday.

Biden, who is known around the world for his stint as the vice president during the Obama administration, will be the oldest person ever sworn in as president of the country. He turned 78 in November 2020.

Biden’s inauguration is taking place under the shadow of the unprecedented health crisis and protests in the US.

The security in the capital has been stepped up amid a high level of security concerns following the January 6 Capitol riots.

In his victory speech in his hometown, Wilmington, Delaware in November, Biden pledged to unite the country calling it “a time to heal in America”. “I pledge to be a president who seeks not to divide, but to unify; who doesn”t see red states and blue states, only sees the United States,” Biden said.