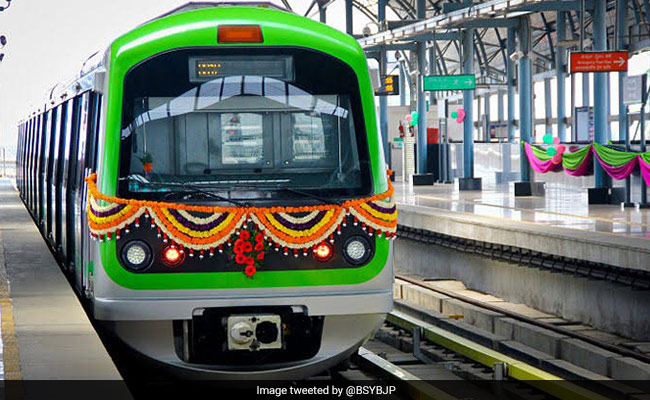 Though just 6 kilometres long, the new stretch of Bengaluru’s Namma Metro will have five stations.

A new stretch of Bengaluru’s Namma Metro train service will be inaugurated today, on the occasion of Makara Sankranti, and will be thrown open to the public from Friday.

The stretch on Green Line connects the existing Yelachenahalli Metro Station to the Silk Institute Metro Station on Kanakapura Road — a highway out of Bengaluru. It will be inaugurated by Union Minister Hardeep Singh Puri.

“After the successful launch of the train service to the Airport, here is one more step towards easing commute in Bengaluru,” Chief Minister BS Yediyurappa had tweeted on Wednesday.

After the successful launch of the train service to the Airport, here is one more step towards easing commute in Bengaluru. Namma Metro’s 6 km Yelachenahalli to Silk Institute stretch of the Green Line will be flagged off on January 14. #BengaluruMission2022@cpronammametropic.twitter.com/187jY5m2DT

Until today, Namma Metro had 42 kilometres of operational lines.

This line is key for the city’s southern parts that have seen vast commercial and residential development over the past few years. The area like many other parts of the city is also infamous for its traffic jams.

The opening of this line is behind schedule, like much of the megaproject, and last-mile connectivity and parking at Metro stations still remain major challenges.

Last year’s coronavirus outbreak-induced lockdown and the movement of migrant workers to their home states had put a halt to the work, but Metro workers were among the first to be allowed back on site as rules were eased starting June.

The Metro itself had seen a steady rise in ridership in the city where traffic snarls had become a constant until the lockdown in March last year. Though the ridership is slowly picking up now, it is still a long way from pre-pandemic figures.