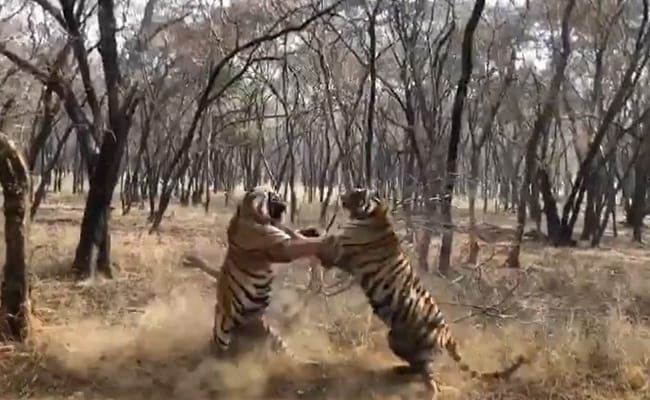 Two tigers are seen walking side by side at a sanctuary. While one is seen walking towards an unpaved jungle path, the other tiger is seen walking away. But within seconds, one of the tigers changes direction and charges towards the path.

A dramatic video capturing the fight between the two tigers was shared by Indian Forest Service officer Parveen Kaswan on Twitter.

“Clash of the titans. Only from India. Best thing you will watch. Received via whatsapp,” Mr Kaswan tweeted.

Clash of the titans. Only from India. Best thing you will watch. Received via whatsapp. pic.twitter.com/36qqvhkG5F

It is not known where in the country the video was taken and when. It appears to have been shot from a moving vehicle that was passing through the sanctuary.

The video has been shared widely on social media.

India has recorded a pleasingly steady increase in its tiger population in the wild, going from 2,226 in 2014 to 2,967, according to a report released in July 2019. The country is now home to over 70 per cent of the world’s tiger population – a source of pride and an enormous responsibility.

Previous articleShashi Tharoor Trolls Australia With His “Word Of The Day”
Next articleExclusive Photos: John Abraham gets snapped on the sets of his upcoming film | Hindi Movie News