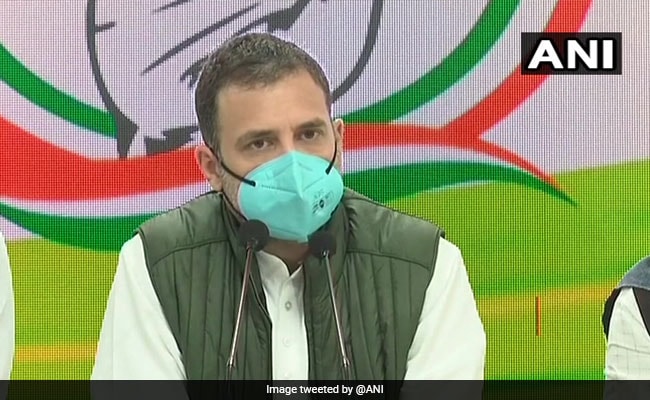 “There is a tragedy unfolding in our country today,” Rahul Gandhi said.

Taking a potshot at Prime Minister Narendra Modi over commenting on the Capitol Hill violence in the US and maintaining “silence” on the farmers protest, Congress leader Rahul Gandhi on Tuesday said that the former has a “lack of understanding of fundamentals”.

“I remember the Prime Minister saying ”Iss baar Trump sarkar”…As a PM of the country, you do not do something like that because you are disrespecting the people of the United States. This is their choice, not yours. So, there is a lack of understanding of fundamentals. Now, of course, Trump lost,” replied Mr Gandhi on being asked about PM Modi’s reaction to Capitol Hill riots and farmers” protest.

After the Capitol Hill violence, the Prime Minister tweeted: “Distressed to see news about rioting and violence in Washington DC. Orderly and peaceful transfer of power must continue. The democratic process cannot be allowed to be subverted through unlawful protests.”

The Wayand MP further lashed out at the central government over three farm laws stating that they were designed to destroy Indian agriculture. He said there is a tragedy unfolding in the country and alleged that India is now owned by 4-5 people.

Addressing a press conference after releasing a booklet over the three central farm laws at the party headquarters in Delhi, the Congress MP said that the government wants to misinform people about this tragedy but the truth is a huge tragedy is unfolding.

“There is a tragedy unfolding in our country today. The government wants to ignore this tragedy. It wants to misinform people about this tragedy but the truth is a huge tragedy is unfolding. I am not just talking about the farmers, because that is only a part of that tragedy,” he said.

Farmers have been protesting at the different borders of the national capital since November last year, against the three newly enacted farm laws — Farmers’ Produce Trade and Commerce (Promotion and Facilitation) Act, 2020; the Farmers Empowerment and Protection) Agreement on Price Assurance and farm Services Act 2020 and the Essential Commodities (Amendment) Act, 2020.