Day After Surfacing In Trinamool Congress Rally, Goli Maaro Slogan Back With BJP 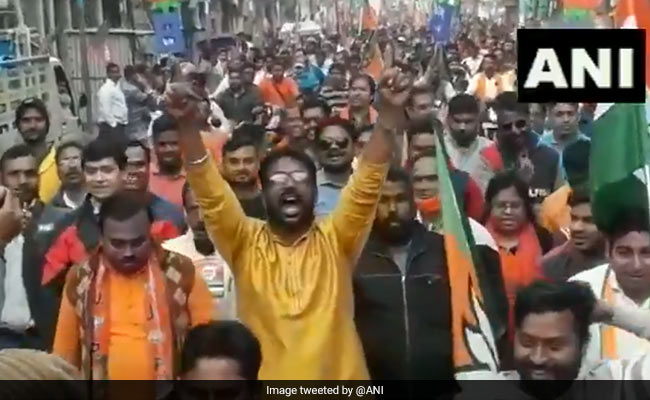 The rally was led by Suvendu Adhikari, the BJP’s newest recruit from the Trinamool

Twenty-four hours after the Trinamool tweaked the provocative “goli maaro” slogan and shouted it as its padyatra marched down the streets of south Kolkata, the original version of the slogan was heard again at a political rally at just 50 km away — this time at a rally held by its rival, the BJP.

The rally was led by Suvendu Adhikari, the BJP’s newest recruit from the Trinamool. He was accompanying the local MP Locket Chatterjee.

In March, the slogan echoed in the heart of Kolkata, at a rally attended by Union minister Amit Shah.

The Trinamool, red-faced over its supporters using a “BJP slogan” blamed the saffron party for bringing such volatile vocabulary into the political discourse.

“This slogan is BJP culture. A central minister used it, roused his party workers against those protesting NRC. This type of slogan is unwanted, unwarranted and uncalled for. Instruction has already been issued by the party alerting and alarming each and every party worker not to repeat this slogan. Our party does not approve such slogans such culture. This is the culture of BJP,” said Sukhendu Shekhar Roy, the party’s Rajya Sabha MP.

The BJP, which had attacked the Trinamool yesterday, refused to blink today. Samik Bhattacharya, BJP spokesperson and former MLA, said, the two incidents of slogan shouting could not be compared.

“Trinamool tweaked the slogan to say Bangal kay gaddar… What do they mean by Bengal’s traitors? They mean leaders like Mukul Roy who quit TMC and joined BJP. They have been calling such leaders traitors and attacking them by name. Yesterday, they not only shouted ‘shoot the traitors of Bengal’, they even named the state party chief Dilip Ghosh and said, ‘We will skin Dilip Ghosh’. Is this acceptable?” Mr Bhattacharya said.

On the BJP slogan shouting today, Mr Bhattacharya said, “BJP doesn’t support it. We condemn the use of such words in the public domain. But you can’t relate today’s slogans with those of yesterday. What is the meaning of ‘Desh kay gaddar’? The traitors of the country… people who come and kill our soldiers at night, cause explosions in temples and mosques, help enemies of the country. Our policy is clear. No mercy to mercenaries. Our armed forces will shoot them dead. This is the demand of the people. But the language used today we don’t support it and we are duty bound to stop it,” he said.

At yesterday’s rally, the word “Desh” (country) was replaced by “Bengal” and chanted in presence of several ministers of the state and the police. The rally had followed the route of a BJP roadshow that ended in violence on Monday.

Trinamool spokesperson Kunal Ghosh had conceded that the slogan-shouting should not have happened and said it was the result of “over-exuberance” by some party workers.

“The words ‘‘goli maro’‘ should not be taken literally,” he had added.

CPM MLA Sujan Chakraborty condemned both the parties for their dismal political language.

“Very unfortunate, very provocative, very attacking, very deadly, very uncivilised and it is clear, the same slogan is being echoed by Trinamool… the BJP slogan. The foul is common to both of them. The DNA of BJP is being carried by the Trinamool Congress. Most unfortunate,” he said.

The hate slogan — heard in the capital last January — was seen as a potential trigger to the Delhi riots in which 40 people, most of them Muslims, had died, setting off a massive row across the country. The Trinamool Congress was one of the key opposition parties that vociferously criticized Anurag Thakur and his party.

Today, BJP state president Dilip Ghosh, recalling that episode, said the shoe is now on the other foot. “The TMC has introduced the culture of guns and bombs in state politics. Now they are openly acknowledging it at their rallies,” Mr Ghosh was quoted as saying by news agency Press Trust of India.

Previous articleForeigners Forced To Do 50 Push-Ups For Not Wearing Masks In This City
Next articleHC grants transit pre-arrest bail to ‘Tandav’ director, others