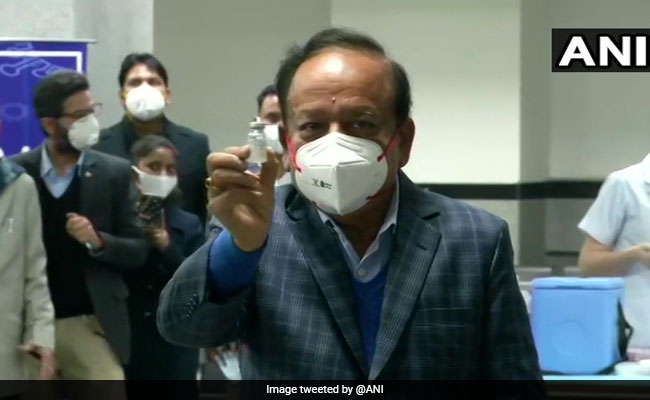 Union Health Minister Harsh Vardhan today appealed to the masses to not pay attention to any rumours against the two Covid vaccines that have been approved for emergency use. Describing the vaccines as “sanjivani (life-saving drugs)”, the leader said the country has entered into the decisive phase of the “war against the coronavirus”.

“These vaccines are ‘‘sanjivani” in our fight against this pandemic. We have won the battles against polio and smallpox. Now, we have reached the decisive phase of winning the war against the coronavirus,” he was quoted as saying by news agency PTI.

The leader was at Delhi’s AIIMS today when the first shot of the vaccine was administered to a sanitation worker, minutes after Prime Minister Narendra Modi virtually launched the country’s vaccination drive against the virus.

Manish Kumar, a sanitation worker at Delhi’s AIIMS, became the first person in the country to be vaccinated against the coronavirus. Healthcare worker Dhawal Dwivedi was the second person to be inoculated, followed by AIIMS Director Dr Randeep Guleria and NITI Aayog’s senior member, Dr VK Paul.

“We have been able to put up a valiant fight against the disease during the last one year. Adopting a preemptive and proactive strategy has resulted in very good performance by India. We have probably the lowest fatality rate in the world,” he added.

The country’s three crore healthcare and other frontline workers will be vaccinated first. Other vulnerable groups like people aged above 50 and those with co-morbidities will be inoculated next.

PM Modi, while addressing the nation today, appealed to the masses that anti-Covid norms must not be ignored.

With inputs from PTI