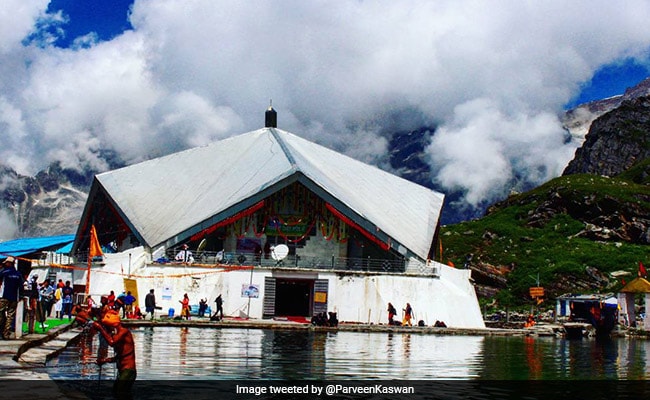 Guru Gobind Singh spent around 10 years at Hemkund Sahib – a gurudwara surrounded by the majestic Himalayas at 14,000 feet – for meditation. A beautiful post on Twitter by conservationist and forest expert, Parveen  Kaswan on Guru Gobind Singh’s birth anniversary today, reminded people about the Hemkund Sahib gurudwara and its sacred connection with the 10th Sikh guru. The much sought after Sikh pilgrimage, located in Chamoli district of Uttarakhand, is dedicated to Guru Gobind SinghJi.

The name ‘Hemkund’ means a ‘lake of snow’ as the gurudwara has a beautiful glacial lake where a holy dip is a must for pilgrims. Surrounded by seven snow-capped peaks, including the Hathi Parvat and Saptrishi peaks, the large lake reflects the divine surroundings on its sparkling waters. The gurudwara is visited by a large number of devotees before it closes down for the winter months between October and April.

According to legends, it is believed that the place was once the meditation ground for Lord Rama’s brother, Lakshman. Devotees often visit a temple nearby dedicated to Lakshmana when they go to Hemkund Sahib.

Many people have been sharing their memories of visiting the Hemkund Sahib in response to conservationist and forest expert Parveen Kaswan’s post on Guru Gobind Singh Jayanti.

The trek is indeed beautiful. By His grace, got the chance for darshan 2 years back 🙏 pic.twitter.com/xthasjd19g