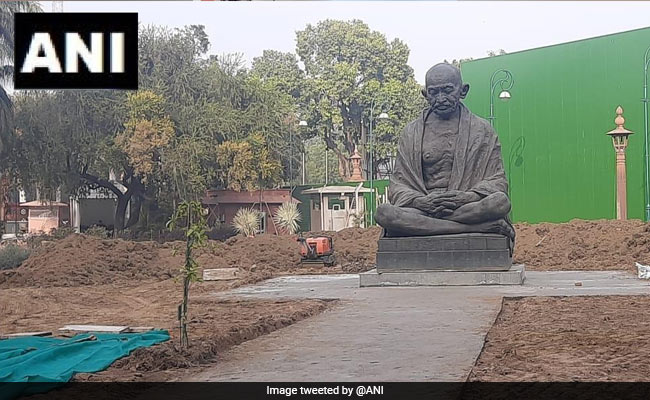 The Mahatma Gandhi statue was installed in the sprawling complex in 1993.

The iconic Mahatma Gandhi statue at parliament has been temporarily moved to make way for construction of the new Parliament building.

The 16-foot statue, near the main entrance, was coming in the way of construction work and had to be shifted, Lok Sabha officials said. It has been moved to a spot between Gate No. 2 and 3 until the new building is ready.

The statue was a familiar backdrop to opposition protests and also a meeting point for parliamentarians. Last year, a group of MPs spent a night at the spot in protest against the manner three farm laws were rushed through parliament.

The Mahatma Gandhi statue was installed in the sprawling complex during the tenure of Shivraj Patil as speaker in 1993. Then President of India Shankar Dayal Sharma established it.

The new parliament building is part of a Rs 20,000-crore Central Vista plan to refurbish government buildings and a 3-km stretch between the presidential palace Rashtrapati Bhavan to the war memorial India Gate.

After much controversy over environment and other concerns, the Supreme Court allowed the project to go ahead earlier this month, saying it did not involve any radical changes in land use.

The proposed four-storied parliament building will cost nearly Rs 1,000 crore. The current parliament building, a circular heritage monument built during the British rule, will become a museum. The spectacular building, with 144 sandstone columns, was designed by Sir Edward Lutyens, who also designed the seat of power in Delhi.