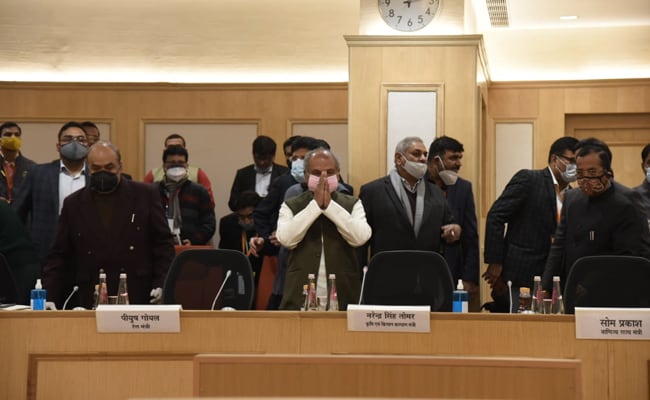 The ninth round of centre-farmers talks has started in Delhi.

The ninth round of discussion between farmers demanding repeal of the three agriculture laws and the centre have started in the capital’s Vigyan Bhavan in the backdrop of the Supreme Court (SC) staying the laws’ enactment “until further orders” and forming a four-member panel to end the deadlock.

The talks assume significance as they could be the last since the SC-appointed committee is likely to start consulting stakeholders from January 19.

Speaking before the talks, Union Agriculture Minister Narendra Singh Tomar said the government will try to resolve the issue through dialogue.

“Between the last and this meeting, the Supreme Court gave a ruling. The Government of India welcomes the order. When the court committee calls the government, we will present our case,” he said.

The protesting farmers have maintained they will not appear before the panel, whose composition they have questioned saying the members were “pro-laws”. This even as one of its members — Bhartiya Kisan Union’s national president Bhupinder Singh Mann — stepped down on Thursday saying he did not wish to “compromise farmers’ interests”.

Farm union leaders have said they do not have much hope from Friday’s talks.

“The President should step in to resolve the impasse. He should mediate,” Bharatiya Kisan Union leader Choudhary Harpal Singh told NDTV.

The statement was a reiteration of the farmers’ demands. The centre has said it would not repeal the laws, but would make amendments to address their concerns.

Bhartiya Kisan Union (Ekta Ugrahan) Joginder Singh Ugrahan – one of the union leaders spearheading the protest – told PTI the farmers will not call off their protest until their all demands are met.

On January 12, the Supreme Court had put the three contentious laws on hold noting that “no solution was in sight”, and that it was trying to solve the problem in the best way possible.

Parallelly, the Congress party has started a nationwide protest in support of farmers, stating it will observe the day as Kisan Adhikar Divasand and take out protest marches in all state capitals.