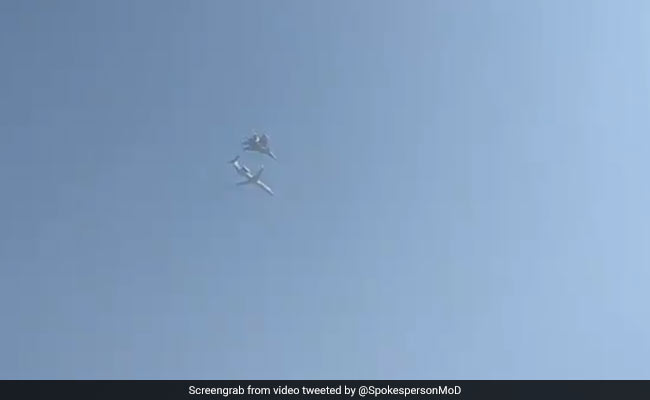 Rafale jet will be the showstopper for the Republic Day parade in Delhi on January 26.

The defence ministry, on Wednesday, gave a glimpse of the excitement the recently inducted Rafale fighter jet will add to this year’s Republic Day parade despite being curtailed in view of the coronavirus pandemic.

Sharing a video of the flypast practice, Defence ministry principal spokesperson A Bharat Bhushan Babu wrote: “Shiny metal in the distant sky taking shape of Rafale as it flies to you! Watch this video to get a worm’s eye of Republic Day flypast this 26 January.”

The newly inducted aircraft is set to be the showstopper on January 26.

Shiny metal in the distant sky taking shape of #Rafale as it flies to you! Watch this video to get a worm’s eye of Republic Day flypast this 26 January #RepublicDay2021pic.twitter.com/gs0bYnoXf4

The Indian Air Force will fly a single jet in the challenging Vertical Charlie formation — when the aircraft flies at low altitude, pulls up vertically and then rolls before stabilising at higher altitude. A video of it was shared today offering a peak of what’s in store for the 25,000-odd guests expected.

Rafales, inducted into the Indian Air Force’s “Golden Arrows” Squadron amid escalating border row with China in eastern Ladakh, have also been deployed in the five-day mega air exercise with French air and space force near Jodhpur starting today.

A total of 38 IAF aircraft and four planes of the Indian Army will participate in the flypast.

In view of the pandemic, the Republic Day parade is set to be a bit different this year. The spectator strength has been brought down from 1,15,000 to 25,000 and children below 15 years old will not be allowed entry. The number of cultural programmes has also been cut down.

This year, the parade route will be shorter and contingents will also be smaller – an outcome of the decision to maintain social distance between troops.