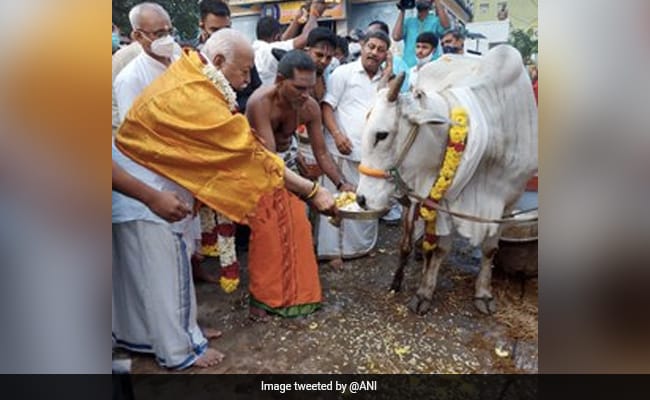 Tamil speakers celebrate their annual harvest festival over the next four days beginning today. Coinciding with similar revelries across the country, such as Bihu in northeastern India and Uttarayan in Gujarat, Tamil Nadu’s biggest celebration comes merely months ahead of the state’s assembly polls. Not surprisingly, key leaders from across the political spectrum are set to mark their presence at the goings on.

RSS chief Mohan Bhagwat, for instance, is already in Chennai on a two-day visit. Today, he offered Pongal prayers at the Sri Kadumbadi Chinnamman Temple in the state capital’s Ponniammanmedu locality.

“During his visit, Bhagwat will participate in…Pongal celebrations. He will meet young professionals and start-up owners and also likely to interact with dignitaries. As per his routine schedule, he will review organisation’s work with local functionaries,” a press statement from the RSS said earlier this week.

Early this morning, Prime Minister Narendra Modi tweeted his customary wishes in both English and Tamil.

Pongal greetings to all, especially my Tamil sisters and brothers. This special festival showcases the best of Tamil culture. May we be blessed with good health and success. May this festival also inspire us to live in harmony with nature and further the spirit of compassion.

His party chief, JP Nadda, is scheduled to visit Tamil Nadu today to attend the Namma Ooru Pongal (Our Village Pongal), a state-wide programme, in Chennai.

The BJP is looking to finally come of the political wilderness in Tamil Nadu this election. While it is yet to announce a formal alliance for the state polls, it did tie up with the AIADMK in the 2019 national election.

Congress leader Rahul Gandhi, meanwhile, is expected to attend the popular “Jallikattu” event in Madurai district. The Jallikattu tradition, involving rampaging bulls, has a passionate following in the state. A few years ago, the Supreme Court had banned the practice citing cruelty to animals, though the Central government later legalised it keeping Tamil sentiments in view.

Coming to celebrate Pongal with you in Madurai, Tamil Nadu. pic.twitter.com/CSUpyUHJaR

Mr Gandhi’s expected attendance at the event was first announced by KS Alagiri, the Congress’s Tamil Nadu chief. “The bull is a symbol of farmers and part of their lives,” he had said earlier this week, according to PTI.

The Congress, though a marginal player in the state, is looking to maximise its gains from its alliance with DMK, the main opposition party in the state, which hopes to replace the ruling AIADMK government.

Both the DMK and the AIADMK will be fighting the upcoming election without their biggest icons, M Karunanidhi and J Jayalalithaa, for the first time in decades.