Saree Or Suit? The Buzz Around What Kamala Harris Will Wear On Inauguration 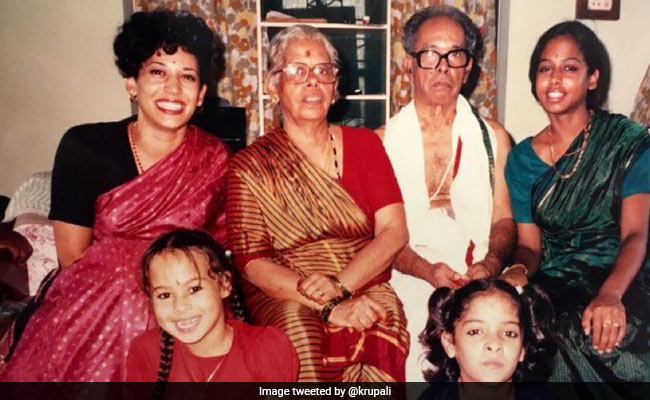 Kamala Harris, seen wearing a saree in an old photograph that is viral online.

The question of whether or not US Vice President-elect Kamala Harris will wear a saree on Inauguration Day to invoke her Indian heritage is one that is currently being hotly debated on social media. In the US, Inauguration Day is set for January 20 every four years. This year, it will fall on Wednesday, and the prospect of Kamala Harris – who has scripted history as the nation’s first Black and South Asian Vice President – wearing a saree is one that has led to spirited discussions on social media.

Speculation around what Ms Harris could wear on her inauguration had been rife before the Democrats had even won the election. In 2019, at an event hosted by Asian American group called One APIA Nevada, an audience member had asked Ms Harris if she would wear a traditional Indian garment if she were elected president, reports KTBS.

“Let’s first win,” Ms Harris had responded, smiling. “My mother raised us with a very strong appreciation for our cultural background and pride. Celebrations that we all participate in regardless of how our last name is spelled. It’s the beauty of who we are as a nation.”

Kamala Harris’s mother, Shyamala Gopalan, was born in Chennai and immigrated to the US. Her father belongs to Jamaica.

While the question of what Kamala Harris chooses to wear on Inauguration Day may seem trite and unimportant when viewed against more significant matters, some say that donning a saree could send an important message about how the Biden-Harris administration intends to better represent minorities.

“I wouldn’t be surprised if we see her show up to the inauguration ball in a beautifully woven Banarsi saree,” fashion designer Bibhu Mohapatra told CNN.

“Madam VP @SenKamalaHarris I am standing by. It will be an honor to dress you,” the New York-based fashion designer, who was born in Odisha, wrote on Twitter.

Thank you @CNNStyle@ZinniaBukhari for this. Madam VP @SenKamalaHarris I am standing by. It will be an honor to dress you ♥️????????https://t.co/KiouNzEgjT@mayaharris_@meenaharris ♥️

His statement further fueled speculation that Ms Harris could don the six yard garment on Wednesday.

Many people took to social media to say that they hoped to see the 56-year-old in a saree.

@KamalaHarris@SenKamalaHarris I am a Tamilian & your mother was a Brahmin like me. I would like to request you to wear pattu pudavai (Silk Saree) for your inauguration..I would love to be there for you & your family but I am not able to. God bless you ma.. All the best!!

Others thought it would be unlikely from a politician who has so far stuck to wearing formal suits.

“I predict she’s going to wear something appropriate, and likely what she generally wears: a suit. She’s been in the public spotlight for years, especially in California, and that’s what she wears. Vogue UK notes the same thing: ‘Harris has always worn suits, but she has replaced the skirts with trousers’,” wrote one Reddit user.

“A lot of people here are asking, “Who cares?” In all seriousness, it seems like some Indian-Americans might care. It could be a nice symbolic gesture. All the same, it still seems a bit unlikely to me that she’d do it. But more power to her if she does,” another Reddit user remarked.

I wonder if our future VP Kamala Harris might wear an Indian sari for the inauguration. Would be really cool if she did, but I can think of several reasons she’d choose not to.

While Kamala Harris has rarely been seen in a saree, an old photograph that has being widely shared online does show her wearing one. The pic shows her on a couch with her grandparents, wearing a red saree.

To see the future VP and POTUS @KamalaHarris wearing a #SARI has me crying tears of JOY! #india#BidenHarris2020pic.twitter.com/TVFRpH0crS

Meanwhile, this is not the only reason why Ms Harris’s sartorial choices are being discussed on social media. Last week, the socks she was filmed wearing in her niece’s video saw a spike in demand. Her niece, Meena Harris, posted a video on social media which shows Kamala Harris wearing socks that say ‘The Future is Female’.

The company that manufactures these socks – Gumball Poodle – soon posted an update on its website saying that the style had seen a spike in demand and that users could face delays in shipment.