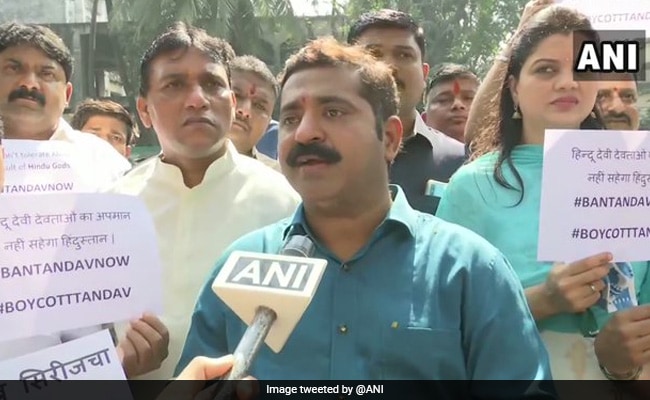 He referred to scenes he said mocked Lord Shiva and demanded they be deleted and that actor Mohammed Zeeshan Ayyub apologise. Ram Kadam also tagged I&B Minister Prakash Javadekar in a tweet and called for a censor board to review content streamed by OTTs like Prime and Netflix.

“I am going to Ghatkopar Police Station to file an FIR against the creators, actors and director of this web series (who have) hurt the feelings of Hindus (and) desecrated Hindu deities in the Tandava web series,” Ram Kadam tweeted in Hindi this morning.

“Why every time in movies and web series Hindu gods and goddesses are insulted? The latest example is ‘Tandav’ (and) Saif Ali Khan is once again part of a film or series that has (hurt) Hindu sentiments,” he added.

Why is it becoming a trend amongst films and web series makers to demean Hindu gods? Latest culprit seems to be the series #Tandav. #SaifAliKhan again part of a film or series which attempts to target Hindu deities. Director Ali Abbas Zafar needs to remove that scene which mocks pic.twitter.com/AausBUh2ky

“The (scenes) mocking Shiva have to be removed. Actor Zeeshan Ayub and director Ali Abbas Zafar have to apologise. ‘Tandav’ will be boycotted till necessary changes are made,” Ram Kadam said, adding the hashtag “#BanTandavNow”.

Last month Mr Khan was criticised over remarks about a “humane” side to the character of Raavan in “Adipurush”, a film scheduled to be released next year. He later apologised for his remarks.

“Tandav” has been criticised by BJP leaders and members of the public for allegedly hurting Hindu sentiments. Among those to lash out is Kapil Mishra, a party figure accused of making incendiary speeches that triggered the violence that engulfed Delhi in February last year.

“As this day comes to an end… There is still this web series available online spreading massive hate against our dharma and our Gods making hero out of terrorists and making fun of our forces… It’s still up and running,” Kapil Mishra tweeted Saturday.

As this day comes to an end,

making hero out of terrorists and making fun of our forces

It’s still up and running

In his letter to Mr Javadekar, Manoj Kotak (the BJP MP from North East Mumbai) said: “It seems the makers of ‘Tandav’ (are) deliberately mocking Hindu gods and disrespecting Hindu sentiments”

The centre’s move came after the Supreme Court sought its response on a petition to have an autonomous body regulate content on OTT, or Over The Top, platforms.

OTT platforms have been frequently accused of hurting Hindu sentiments in the past few months.

In November a FIR was registered against Netflix in Madhya Pradesh’s Rewa district after allegations against the BBC adaptation of Vikram Seth’s “A Suitable Boy”. The scene that drew the ire of self-styled guardians of Indian culture showed a man and a woman kissing inside in a temple.

With input from PTI