This Is Tejashwi Yadav Speaking. A Phone Call In Bihar Goes Viral 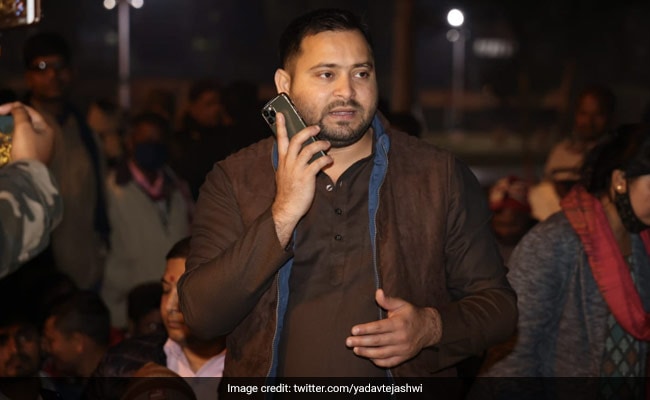 “These people say they are not being allowed to sit on dharna,” Tejashwi Yadav said, and asked why.

Bihar opposition leader Tejashwi Yadav failed to oust Chief Minister Nitish Kumar in the November state election but his clout is intact, or so it appeared from his phone chat with a top official, widely shared on social media.

The Rashtriya Janata Dal (RJD) leader arrived to show his support to protesting teachers in Patna when he was told that the protesters had been denied permission for a sit-in at their planned venue. He spoke to the Chief Secretary, police chief and the Patna District Magistrate and extracted an assurance that the protest would be allowed.

In a video that is in circulation online, Tejashwi Yadav is seen speaking to Patna District Magistrate Chandrashekhar Singh on the spot, surrounded by the protesting teachers. Mr Singh can be heard on speaker phone.

“These people say they are not being allowed to sit on dharna,” Tejashwi Yadav said, and asked why.

“Will they need to keep asking for permission daily? There has been a lathi charge, their food has been thrown away, they were driven away…Now they are all scattered. Some of them are here at Eco Park with me…”

The RJD MLA said the teachers only wanted to exercise their democratic right to protest.

“Whatsapp kara dete hai inka application (I will send you their application by WhatsApp. You please allow them,” he “instructed” the senior official.

Mr Singh replied he would look into it.

“Kab tak bataiye (When will you do it?)”

The officer, rattled by this time, shot back: “Kab tak meaning? You will question me?”

A pause, then an instant change of tone.

“I will send you a WhatsApp test. Respond fast or we will have to sit here all night,” Tejashwi Yadav said, cutting the call.

Sharing the clip, activist Sudheendra Kulkarni, a former aide of former Prime Minister Atal Bihari Vajpayee, commented: “Must watch. And watch it till the end to know why Tejashwi Yadav is fast emerging as one of the most promising mass leaders of India.”

Must watch. And watch it till the end to know why @yadavtejashwi is fast emerging as one of the most promising mass leaders of India. https://t.co/QVhd4W1yTs

Tejashwi Yadav, 31, led the opposition coalition to an impressive tally in the Bihar election though he fell short of a majority. Powered by his aggressive campaign, his own party emerged as the largest.

Previous articlePriyanka Chopra, Sushmita Sen, other B-town celebs congratulate Joe Biden and Kamala Harris
Next article#AgainstAllOdds! Swara Bhasker: You can be the biggest star and you’ll still have moments of frustration and failure | Hindi Movie News