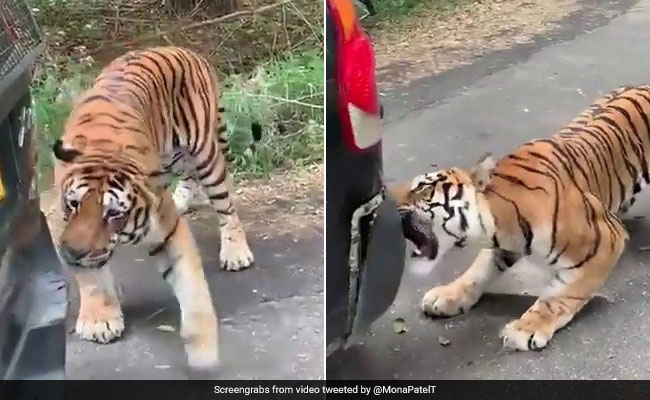 A viral video shows a tiger trying to grab a safari vehicle at Bannerghatta.

A video of a tiger trying to grab a safari vehicle with its teeth has gone viral on social media. Filmed at the Bengaluru Bannerghatta Biological Park, the video shows a curious big cat trying to bite the rear end of a tourist vehicle.

Footage of the tiger gained massive traction over the weekend after it was posted on Twitter by wildlife enthusiast Mona Patel, according to The News Minute. In the one-and-a-half-minute clip, the tiger is seen biting and pawing the rear bumper of the vehicle and grabbing it in its powerful jaws. It then appears to drag the vehicle backwards – although some on social media have pointed out that the tiger is not ‘pulling’ the car, as has been claimed, but rather the driver is reversing it.

Since being shared three days ago, the video has garnered over 18,000 views and dozens of stunned reactions.

“These caged guys in the vehicle should be in jail for reversing the vehicle on the tiger,” wrote one person in the comments section.

“The poor animal is hungry… just look at his bones,” said another.

Vanashree Vipin Singh, Executive Director of the Bannerghatta Biological Park, told Deccan Herald that the video is about two months old. She said the park’s tigers, “rescued or bred under captive conditions”, are used to the presence of people.

“Had it been aggressive, it would have jumped on the vehicle and attacked,” she added.

Last week, footage of a leopard ‘playing’ with a group of people in Himachal Pradesh had gone massively viral on social media.